Last week I was singing the blues with Blues Journey. This week I am lifted up with Jazz, another poetry picture book by Walter Dean Myers. If last week I was taken on a journey, this week I’ve been on a ride! Walter Dean Myers expertly word paints jazz scenes through poems like spotlights on a stage, describing the elation felt by both performer and listener. The poetry mirrors jazz style, expressing improvisation and spontaneity. Instruments come alive with emotion as expressed in the opening poem “Jazz”: “A black man’s drum/ Speaks/ LOVE”. At times the poetry is upbeat and hopping. In other poems, the pace slows down, with references back to jazz roots in the blues as heard in “Session I”. “A lifetime of could-have-beens/ Sliding through a silver flute/ It’s our song”.
Along with Christopher Myers’ illustrations revealing the depth and intensity of this musical style, the poetry expresses jazz as a mind-body experience through words that get you feeling, thinking and moving all at once.

Like Blues Journey, Jazz begins with a two page introduction offering the historical background and development of the musical style. A “Glossary of Jazz Terms” and a “Jazz Time Line” follows the poetry.

This week the Poetry Friday Roundup is at Check It Out.
Posted by Sheri Doyle at 8:05 AM 2 comments: 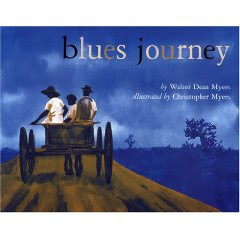 I’m enjoying the February blues. During my first read of Blues Journey by Walter Dean Myers, I was mesmerized with how the blue, purple and brown tones of Christopher Myers’ illustrations worked so beautifully with the heartfelt poetry. On my second read, I couldn’t help but sing my way through the book. While the subject matter of the blues is often honest, raw and dark in nature, the poetry sung as lyrics lifted me up. As the title suggests, the blues poetry took me on a journey and gave me a better understanding of what is asked in the book of the blues: “Are you my pain and misery,/ or my sweet, sweet company?”


Blues Journey opens with an introduction on the origins of the blues, describing how the art form is rooted in two traditions in African music with the “call and response” style of the lyrics and the pentatonic (five tone) musical scale. The brief description on the evolution of blues is a fascinating background to share with young readers before they read the poetry. A helpful “Blues Glossary” on the final page helps readers understand terms such as “crossroads” and “feather pillow”.

Teachers might be interested in sharing this book with their students in English and Music classes or for Black History Month celebrations.

If you find this book at your library or bookstore, there's a chance you'll have a crowd of people encircling you if find yourself breaking into song. 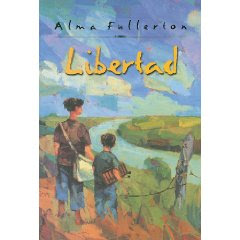 The novel begins at the site of the Guatemala City Dump where Libertad and his younger brother, Julio, search through garbage for items that can be traded in for money. After the accidental death of their mother, the brothers and their new puppy, Guerrero, set out on a journey to find their Papi living in the United States.

I was immediately taken by the voice of Libertad, the emotional pull of the poems, and the expression of devotion between Libertad, Julio and their dog. As Libertad carried the heavy responsibility of protecting Julio throughout the novel, I found myself naturally caring deeply for Libertad’s own safety and innocence. I have read Libertad twice in the month of January and I am drawn to read it again to revisit the sense of hope and perseverance the brothers express toward each other.

After being so moved by this verse novel, I contacted Alma Fullerton asking if she would answer some questions for a blog interview. She kindly agreed.

Sheri Doyle: What was the inspiration behind Libertad? From inspiration to publication, how long did this process take?

Alma Fullerton: Every once in a while you come across a story that won't let you go. You know that before you can move on you have to write that story. Libertad was like that. I came across a story of a boy who walked from Guatemala to Texas to be with his cousin. I tried to put it away but couldn't, so even though I was working on another book at the time I started to research - and I found a lot of other stories as well as finding out about Safe Passage during that research. There were about 2 years of research before I wrote a thing on that book - I did work on other things while I was researching. When those things were done and I started writing Libertad it took about 3- 6 months to write - that was in summer - winter 07. I signed the contract with F&W March 08 and there were finished copies by June 08. Not all stories go from signed contract to finish novels that fast - in fact most don't.

Sheri: From your poems, we get a pretty clear picture of life in the Guatemala City Dump. What was the research process that lead to such a believable setting and voice for your novel.

Alma: A lot of research for the setting - voice - just listen to people talk.

Sheri: I fell in love not only with Libertad and his younger brother Julio, but also their dog, Guerrero. What inspired you to develop the character of Guerrero?

Alma: While researching I saw some photos of children in the dump holding puppies. Puppies are universal - Not everyone loves dogs (I do) but everyone can relate to kids and dogs. Having Guerrero and having the children play and act like children gives North American children who are not living in the same conditions some kind of a connection to the children in my book - if that makes sense. I think you need something the readers can connect with - as well as feelings - feelings are also universal.

Sheri: I really enjoyed the way music was a source of joy and empowerment for the boys. While researching this book, did you get a chance to listen to Guatemalan marimba music?

Alma: I listened to a lot of marimba music and Hispanic music while writing.

Sheri: Libertad has been listed as an official selection for the Silver Birch Awards, Forest of Reading Program. How do you feel about middle graders facing some of the difficult subject matter of your book?

Alma: People fear what they don't know. The more children who learn about the world around them now the more likely they'll change things in the future.

Sheri: One of my favourite poems is the villanelle titled, "Bad Day." Are there any other poetic forms in the book? Why did you choose to work with this form in particular?

Alma: There's a haiku poem in the very beginning of the book as well but mostly its free verse. I chose the villanelle here because I needed to slow down - almost stop time and villanelles do that well.

Sheri: What are the advantages to telling a story (or this story, in particular) in verse, rather than prose?

Alma: I didn't choose to tell the story in verse - the story chose verse. I tried writing it in prose but it only worked in verse for me. I needed the power of verse to get the feelings across the way they needed to come across.

Sheri: Do you have any advice for kids interested in writing?

Alma: Just keep writing. Keep journals if you can - you'll love having them later. Expect to revise - a lot.


~~~~~
Here's a little taste of Libertad - an excerpt from the villanelle mentioned above in the interview.

This is a good garbage day of cardboard and plastic bags.
Julio and Mami search rubbish heaps. As I stand guard,
The sun beats hot upon our backs through shirts of
tattered rags.

Julio, small and spindly, trips on cardboard that he drags.
He rises tall with an unfazed grin. We’re working so hard,
This is a good garbage day of cardboard and plastic bags.


To find out more about Libertad, Alma Fullerton and her books, visit http://www.almafullerton.com/ .

Thank you, Alma, for taking the time to answer some questions about your beautiful book.


The Poetry Friday Roundup is at Great Kid Books.
Posted by Sheri Doyle at 7:06 AM 7 comments: 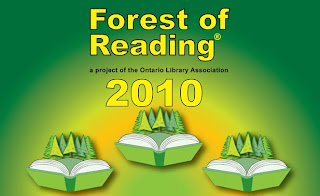 Are you reading any of the books on the Forest of Reading lists?


The Forest of Reading is an Ontario Library Association project that promotes a love of reading. Librarians and teacher librarians have nominated books by Canadian authors to create top ten lists for eight programs. Each program is aimed at a specific reading group. (For example, the Silver Birch ® Award Reading Program is aimed at readers in grades 3-6.) Students are encouraged to read the ten titles in their grade category and then vote for their favourite title. The program ends with an award event called “Festival of Trees.” According to the OLA website, the "Festival of Trees is Canada’s largest literary event for younger readers.” The event is held in Toronto where students, teachers, librarians and authors will gather to hear the winners announced. What better judges of children’s literature are there than kids! My daughter has already reserved a ticket through her school and is busy reading the books within her grade category.

I was excited to see the verse novel, Libertad, by Alma Fullerton, on the Silver Birch Award list. From the first poem to the last, I loved this book and have read it twice in the last month. I recommended this book to some of my friends, a few writers, my husband and my daughter. Libertad is “all the buzz” over here in my little world. I was lucky enough to hear back from the author, Alma Fullerton, agreeing to answer some questions for a blog interview. To read this interview and learn more about Libertad and Alma Fullerton, watch for tomorrow’s post.
Posted by Sheri Doyle at 12:00 PM No comments:

Giant snowflakes are spinning against a lavender sky today just as they were on the day I wrote a poem titled, "Snow Music." I received my complimentary copies of Spider today and on page 32, I discovered my poem gorgeously illustrated by artist, Jing-Jing Tsong. The colours are breath-taking and they are very similar to the colours of the sky on the snowy day that inspired this poem.

I'm really delighted that my poem appears in an issue filled with so many interesting pieces - wonderful stories (as always), an adorable poem by Bill Roberts and some fun winter actitivites for kids. Maybe you'll see it on the magazine shelf this month. 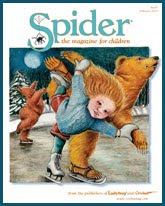 Posted by Sheri Doyle at 3:17 PM No comments: